Home » Uncategorized » How he loves

I noticed I’ve been writing on hard days and when I’m upset or emotionally a mess and that kind of made me sad. I received a challenge to “give up” something, kind of like lent I guess. I decided on complaining. I’m the biggest complainer and I like to be justified and validated so I blog and tweet and every other type social media out there. Instead of a rant post, like I’m usually writing, I’m going to share with you my love story. Our anniversary is at the end of this month, Fathers Day is coming up, and since I’ve shared our unhappy days and how I get through them, this post is the WHY…

I met Joshua in the beginning of 2008. I was dealing with a break up at the time I met him. I had an amazing boyfriend whom I loved dearly at the time and was struggling. I went on a dating spree and just went out on dates all the time. I started at UVU and wasn’t used to all the attention I was getting. Well I guess I was used to the attention, I was just shocked at how much of it there was. Idk how to explain it but I didn’t know what I was doing. Lol.

I hung out at the Multicultural Center (MC) a lot and I think I was there more than I was ever in class. I noticed this miko (what Tongans refer to Latins as) and I was a little confused. His style was different, he had this presence about him and he hung out with polys. That last part confused me the most. I was like who is this dude??!! Well I got brave one day and went up to him and asked him who he was. Our convo went kind of like this:
Me: Hey what’s your name?
Him: I’m josh.
Me: Hi, I’m lala. Sorry if I forget your name, I’m so bad with remembering them. (because I literally forgot his name after he told me. Prolly because I was nervous. Lol)
Him: If you forget I’ll never talk to you again.
*cricket*cricket*
I was literally thinking excuse me sir, who do you think you are???
I saw him later that day and we exchanged numbers and well you can kind of guess the rest.

Our relationship after that was amazing. Until we got married. Then things got crazy like a roller coaster. It had lots of ups and downs and twists and turns. I’m not going to pretend that it was all a “bed of roses”. (I seriously don’t understand that metaphor. Unless it’s roses without the stems.) We had an awful start. I was pregnant, he didn’t really want to marry me, we were both scared and confused, I was young and didn’t know how to do anything at home, we were uncommitted and immature, man it was awful. But I knew Josh. We may have met, married and had our first child in one year, but I KNEW the man he was. And I was just not willing to let that go.

When we dated he was just the most thotful, caring, concerned, loving and sweetest guy. He would have like random “goodies” stashed in his car for me. (How is that NOT true love??? Lol especially if you know me. I’m ALWAYS hungry.) He wanted to do random things that I wasn’t used to. He helped me see past my own self and to question everything. He didn’t mind that I was on the speech and debate team was kind of a nerd. He knew that I was insecure and self conscious so he made me see myself differently. His texts weren’t the usual dating texts and he tried so much to help my family. He even paid the down payment on my tuition BEFORE we started dating because my family couldn’t afford it at the time. I would talk to him about my “ex” and he would hold me and tell me it was ok. It was strange that he would be so kind towards me yet didn’t expect much in return.

Yes we ended up having issues and he struggled with certain things and all wasn’t picture perfect like I’m making it seem but that’s who Joshua IS. That’s his personality. He just loves and loves and loves. But he’s also been hurt in his own ways. He’s had struggles different from my own. Some are similar but some I’ll never understand. My in-laws are divorced something I’ve never understood and could never understand. He made some not-so-very-smart choices and a lot of them I could never understand even if I tried. And vice versa. So yes he made mistakes before and during our marriage but so did I. And it wasn’t until we both realized that we could blame each other and point fingers and say who is at fault as much as we wanted but NOTHING was going to work until we both stopped.

We put our acts together and began to talk. We had very hard, EXTREMELY difficult conversations. We still have them some days. We tried to understand each other as much as we could and decided that the past needed to stay in the past and we are not letting it happen again. We committed.

Joshua is the sweetest most amazing husband, father, son, friend, uncle, whatever, out there. I am not even kidding. Nor am I exaggerating or being sarcastic. (For those of you who can’t tell.)

He may not exactly have a way with words (that’s MY strong suit) but he shows love in every way possible.

He enjoys taking care of our home. Both inside and out. It’s kind of embarrassing because he would make a much better house wife than I do. Lol.

He leads our family in scripture reading, prayer, learning, and playing. We don’t have a TV because my kids are TV zombies but he likes when they do ABC Mouse and Sesame Street and learning activities. He makes me go to the temple with him and if he could, he would just work on family history all day.

He always goes to visit his abuela in the rest home. When she first went in we went to see her multiple times a week. Even with his busy schedule now, he still tries to see her almost weekly.

He is always thinking of other people and how we can help them and how they can grow or what we can do to make them feel loved.

I know I’m totally bragging and I apologize but I seriously have such a good man. (Don’t worry, I know we’re equally paired. Even if no one else thinks I’m as cool as he is.)

It’s been almost 6 years since we got married. We’ve had 4 beautiful babies, 3 of whom we are so blessed to share our lives with and 1 we can’t wait to see again. We have had so many trials and struggles, it is seriously a miracle that we are still together. But I am so grateful to call him mine.

I know I’m not always grateful.

I complain a lot.

I like to hold on to the past and it’s so hard for me to let go.

But I stayed and I committed and I tried so hard to make things work because I knew what I would be missing out on.

I remember when I had mailed the divorce papers back and I kept thinking to myself how sad it would be if another woman came into his life and he blossomed into the “Joshua” I knew him to be. When I was deciding on whether to come back and to try and make things work, I just kept thinking about the sweet, caring, sincere, concerned and loving guy I dated 3 years prior and I believed and wanted to believe that THAT guy was Joshua. 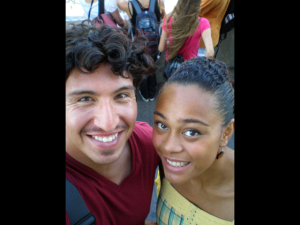 Now, 3 years later, I know that I was right. He IS THAT guy and MORE.

I choose to forgive.

I choose to love.

I choose to appreciate the good and recognize that there has been so much good. It can overshadow the bad.

I choose to love him regardless of his past choices.

And I know he does the same.

He shows me in every way that he knows how.

He likes to buy me things (even though none of our love languages is “gifts”, I think he just likes to feel that I am taken care of. And I am. He does a very good job of that) without me knowing half the time. Probably because I hate shopping and I’m never paying attention when we do. He just listens to what I need then buys. I don’t even have to ask him.

He likes to help me take care of myself. (If you’ve noticed I’m kind of a fat girl at heart and I seem to like everything that’s NOT good for me. Like chocolate, mcdonalds, butter and so on.) He makes me green (disgusting) shakes, we go to the gym (shocker, I know), he puts audiobooks on my phone, he makes me get up at 6 am (that’s a HUGE shocker, ikr??) to read scriptures and if I stink instead of telling me he buys me a new deodorant. (I told you he’s a smart man).

He still likes to do random things and if we could travel the world (which we will as soon as I get my passport), I know we would. He likes to take me places. And I love it.

It’s like I married a life long life coach. Lol. He bring out the best of me and helps to become better. He also brings the worst out of me and still loves me regardless. This is going to be our anniversary cake this year: 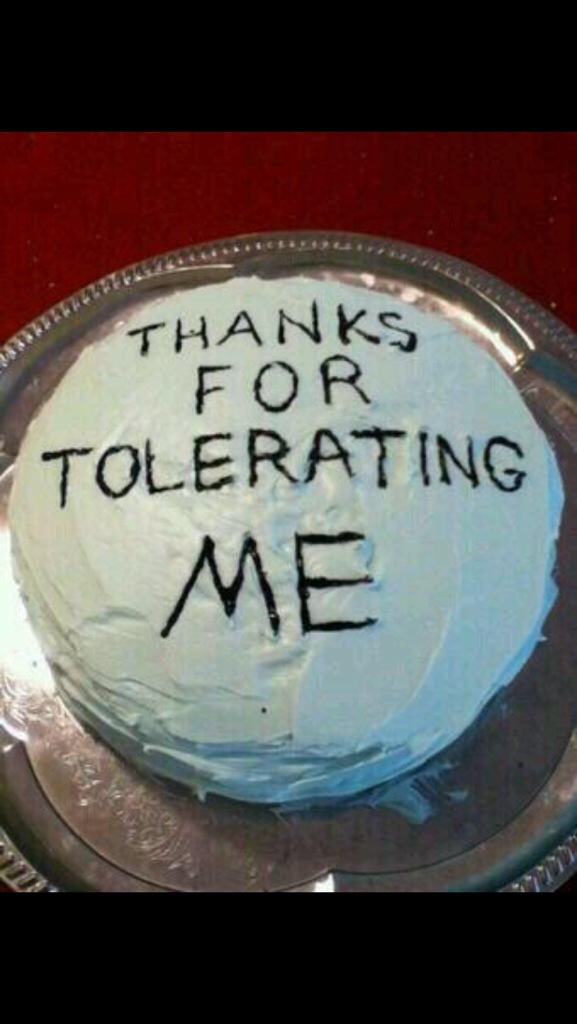 Not because he only tolerates me but because sometimes I’m intolerable and he STILL loves me.

He may not buy me roses like most husbands do, instead he helps me plant them.

He may not buy me clothes like most men do, but that’s cuz he knows I hate shopping. Lol.

He may not buy me chocolate like most men do, but that’s because he knows I have a stash SOMEWHERE.

He may not take me on a luxury cruise like most men would try to do, but that’s because he knows I’m terrified and wouldn’t go anyway.

He may not want to celebrate the day of our anniversary or the day of my birthday (or his for that matter), but he lets me know each and every day how loved, special and cared for I am.

JWG, I love you. You are amazing. And although I complain all the time, I’d rather complain ABOUT you and not WITHOUT you. 😁

The reason why I stay committed, why I choose to love and forgive and everything else that comes with marriage, is simply because he is an amazing man, with an amazing capacity to love and I am amazed that I get to be the lucky girl who gets to have eternity with him.

Or choose to see how amazing your love story can be. 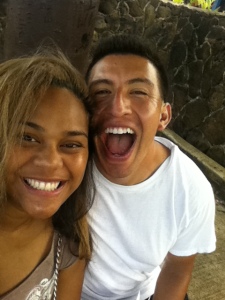